Edge of the rabbit hole, looking in; he stood there a long time. When night fell we could hear his voice echo, low, across the field: quietly laughing. In the morning, he was gone.

Lived life like a rearview object. Approaching but never meeting. Always closer than he appeared.

They found the teddy bear at the bottom of a dumpster. Arms twisted, stuffing burst from torn seams. A plastic bag that read “Thank You” in red block letters had wrapped itself around the bear’s head, gently. No-one investigated the crime.

“No, Mr. Bond. I expect you to die.” Then, calmly, he pulled the trigger, knelt down and patiently explained his plans to the corpse.

“Tell me a story,” she would say. She would lean over him, click off the lights, lay her head into the soft curve of his neck; felt his pulse against hers. “Tell me a story, spin me a yarn.” And he would unravel.

YOU AND I ALONE

i:  Anson is Alone

He had unscrewed, had cleaned with solvent, had checked the filament. He had unbolted the console panel, had rummaged within and checked the internal wiring. On hands and knees he had crawled on the corrugated aluminum deck beneath the silent control-board, had tightened and loosened, had cursed and prayed, had pulled things out and had put them back in in different places, and had generally deconstructed and reconstructed the logic boards in as many ways as were physically possible.

And after all that, the orange light on the otherwise-dark panel had remained lit. Every three minutes and eighteen seconds – Anson had timed it – it would wink out for a moment, then light up again. It was, in short, driving him slightly insane.

Not that Anson wasn’t already insane, by any standardized definition. He had been on the station, alone, for the past twenty-seven years, and that time largely spent fixing small failures in wiring, plumbing, and – on one frightening occasion fourteen years ago- a ventilation array that had almost ejected him into deep space as he’d tinkered with the external monoxide scrubbers. That had been the most excitement he had had since he’d set a magnetically-booted foot on the glossy industrial tiling of the floating outpost Susan-3. Whatever problems he had faced, he had at some level been glad to face them, because they had, at least, broken the monotony.

…And yet this tiny flickering light was doing his head in, because it was the first time that something had gone wrong, even something minor, that he hadn’t been able to fix. Years of practical engineering should have prepared him for anything. Hadn’t he almost entirely rebuilt the lavatory just six weeks ago? Hadn’t he replaced the Central Display with a sheet of translucent polycarbonate from the windshield of a disused landing-pod? Had he not ingeniously employed a series of plasticine retainers to seal off a leaking inflow hose when he had run out of epoxy sealant, and hadn’t he succeeded – even while under the influence of the hallucinogenic fumes that had been slowly filling the bridge? If he could jury-rig a solution to refasten critical life-support systems to their mountings while surrounded by flashes of imaginary colored light in a gradually-rotating cubicle, upside-down- a cubicle whose walls appeared, to his oxygen-starved brain, to be actually melting – was it so much to ask to fix a malfunctioning lightbulb?

Unless, of course, the bulb was just doing what it was supposed to. For his first ten years on Susan-3, Anson had checked that bulb almost religiously. Back then, that bulb had meant something. It had been important. But after a lifetime of steadfastly remaining dark, this bastard bulb had suddenly gone and done what it was built for, and now Anson was furious. Furious, and certain that something was wrong. Perhaps it was corrosion on the terminal contacts, though that was the fourth thing he had checked.

Once again he consulted his portable terminal. The manual stated that the bulb would illuminate, periodically, in the event that the station’s remote sensors detected any of a short list of phenomena. The remotes were positioned at distant perimeters from the station hub, connected by nearly-unbreakable microfilament carrier leads. If something happened nearby, they would dutifully compute the event against a list of known criteria, and – in a cost-saving measure – would transmit a simple binary signal to the main station hub console in the event that specific conditions were met. This binary signal would travel along the microfilament, and it would trip a circuit that would illuminate a small bulb on the upper right quarter-panel of the primary console.

And after that, Anson would have to figure out why. To Anson, after years in space, desperately alone, the most likely reason was that yet another small thing had gone wrong somewhere. After all, that was his life on Susan-3. Things – small things, usually – would go wrong, and he would fix them, and then he would go back to sleep for another twelve hours, or rehydrate a plate of edible protein, or read “Don Quixote” for the hundredth time. To Anson, at this point in his career, there were two types of things: things that worked like they were supposed to, and things that did not. And his job was to convert the things from the latter category into the things in the former category. Until, presumably, he died, either in a station accident or quietly in his sleep, or while reading in his bunk, probably when he was on page 337 and things were just starting to get good.

The light winked out again. Anson stared at it. For nearly two whole seconds, it looked like whatever he’d done, he’d finally solved it. The bulb lit again. Blinkblink. Was it Anson’s imagination, or was it blinking just a little bit faster? He set his portable terminal to timer mode, waited, and started the timing again. Three minutes and fourteen seconds. Where did those other four seconds go?

And though he tried to avoid it, had spent years buttressing himself, building psychological walls to defend against that most insidious invader, Hope – Anson felt a stirring in his stomach, and employing basic diagnostics to determine that it wasn’t hunger, he realized he knew this feeling, had a name for it, and the feeling was excitement. Because the bulb was blinking faster now, and that meant it was a proximity signal, and that meant that whatever the remotes had detected, it was something moving.

And whatever it was, it was getting closer.

Saw you at Home Depot, price-comparing brands of loam.  I thought it was sexy how you instantly vetted out the inferior brands of loam based on clay-to-silt ratio. You took the last bag, noticed me eyeing you, and offered it to me – an act which belied a generous nature.  I declined (well, I say “declined” – in fact, I backpedaled and slowly made a 90-degree turn into the fixtures aisle in a languid, graceless “moonwalk”).

I noted your license number as you drove away.  For that is what the love-struck do.

I hope we meet again.  Perhaps you will need some cedar chips someday, or a drill bit. Until then, I think only of you. Well, and that other hot girl who was buying a garage-door opener.  But more you than her. 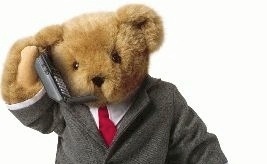 In sharp contrast to last week’s teddybear picnic, whose theme was one of furtive amusement, today’s annual TeddybearCorp employee meeting was fraught with tension. The meeting, held in a conference room at the Palisades Hotel, drew on for over six hours as teddybear CEO Snuffle-Wuffles delivered the yearly financial reports, making extensive use of PowerPoint slides and at one point nearly blinding a smaller plush toy as he frantically gesticulated with a laser pointer. The news was sobering for some.

“We’ve experienced a marked downturn in the rate of teddybear production due in part to new regulations regarding Chinese toy importation, and the bottleneck is still affecting our usual distribution channels,” said Snuffle-Wuffles. “But there’s a problem on the demand side as well. Youths are turning more and more to video games and other more high-tech entertainments, and there’s just not as much call for stuffed bears anymore. How are we supposed to compete with the Nintendo Wii, for example? The closest thing to high tech we have is Vice President Ruxpin over there, and that’s just because he needs batteries.”

Asked for comment, TeddybearCorp Vice President Theodore Ruxpin merely moved his mouth up and down in vague synchronicity with a prerecorded speech.

After the news, stock in TeddybearCorp (HUG) plummeted ten points to a record low of $3/share. “We have to change with the times, or we’re sunk,” said Paddington Bear, the company’s head of marketing. “We can’t conduct our new advertising strategy as we would our picnics – beneath the trees, where nobody sees. That just doesn’t make a whole lot of sense in this day and age.” When asked how he would gauge the company’s future prospects in light of the recent stock bail-outs, Paddington replied, “Let’s put it this way: this rain gear I’m wearing has gone from cute accessory to ominous metaphor. And there are more storms ahead.”

CEO Snuffle-Wuffles appears to be equally grim on the company’s future prospects. “At the picnic, there was a certain tone of melancholy underneath all the frolicking – it was as if we all knew that things as we knew them were coming to an end. And after today’s meeting, I think it’s safe to say that we’re ALL tired little teddybears.” Snuffle-Wuffles paused for a moment, seemingly overcome by emotion. When pressed further, he exhibited the same fiery spirit for which he has been known throughout his long career. “Of course I’m not crying, you moron. My eyes are made of buttons.”

This past Tuesday, or a few weeks ago Friday. Glimpsed you on Congress Street, slowly rotating a kestrel. I was going to suggest you might be more successful with a more sedentary, flightless bird, but my mouth was full of marzipan and I didn’t want you to think I was a mumbler. You were beautiful, then.

You slid a record on the turntable, the soundtrack to Disney’s “The Lion King”, and I was surprised to find that when reversed, the song “Hakuna Matata” was clearly stating: “Art Tatum, a new car”. It made sense, as the last vehicle the jazz pianist was seen driving was a rusting Bentley with missing hubcaps.

I’d been riding cold medicine for days, so I’m not sure it happened. You might be a figment of my imagination. But, extrapolating Descartes, I think you think, therefore I think you are. Though a brick does not think, I think it exists as well, as I was struck by one in a mugging last February, and the pain was very real. Justifying existence makes my head spin. Will you be the one to take a hold of it for me, so I don’t get dizzy?